I have children who always seem to be anxious about something or the other.  My older son used to have many anxieties and had counselling.  My younger son is now doing his school exams and constantly studying or revising. His only method of relaxing is texting and seeing his friends from time to time. In his anxiety about the exams, he started revising during his school lunch breaks and forgoing eating and meeting his friends in the break or after school. I tried to get him to relax through conversations over dinner and asking him about things other than exams.  But he seemed very averse to the whole thing and told me that I didn’t understand ‘modern exams’.  I also enrolled him into a service that offers telephone counselling on anxiety issues but he refused to speak to them. I told him he should join some local sports which would help him with anxiety issues.

Talking about this situation with a friend over lunch, it struck me that I was asking my son to do things I didn’t do myself. I was constantly talking about work or working all the time without breaks, I didn’t meet up with friends regularly enough and never did any sports myself.  I spent many sleepless nights due to anxiety over various things (last night I slept for about three hours!).  My two children were only reflecting the anxiety I felt myself and were modelling themselves over me.  But what a terrible role model I was. Social media has made our lives difficult when we see people being successful and earning money, having millions of followers and having public profiles. Although I don’t think anyone tries to become like these lucky people (and they are lucky); we also want to achieve smaller victories in our lives.  But what if we just tried to be happy and not ambitious?

I have just started re-reading the ‘One straw revolution’ by Masanobu Fukuoka.  Fukuoka was a scientist turned farmer who started a farming revolution by doing nothing.  He was laughed at and ignored for over 25 years until people noticed that he was growing far more crops that way using no insecticide, no fertilisers, tillage and no ‘wasteful effort’.  This morning as it turned 5-00am and the skies became light, I started reading the book after having failed to sleep. In the book, Fukuoka says bluntly, ‘There is no intrinsic value in anything, and every action is futile, meaningless effort.’  I realised that we overdo everything- work, thoughts, worries, money, relationships- when we could just relax and be happy.  In trying to overdo everything, we get anxious.  Realising this at dawn today after a night of no sleep was rather ironic but enlightening.  Fukuoka’s terse words reminded me of the movie ‘The fault in our stars’ in which the lead character, Hazel Grace, says that in reality as we die, everything we do dies with us.  Though again quite a sobering thought, it really means that we are not that important in the scheme of the universe. If we just let go of our own importance, relaxed and became happy without trying to accomplish and over achieve, we would be happier beings. 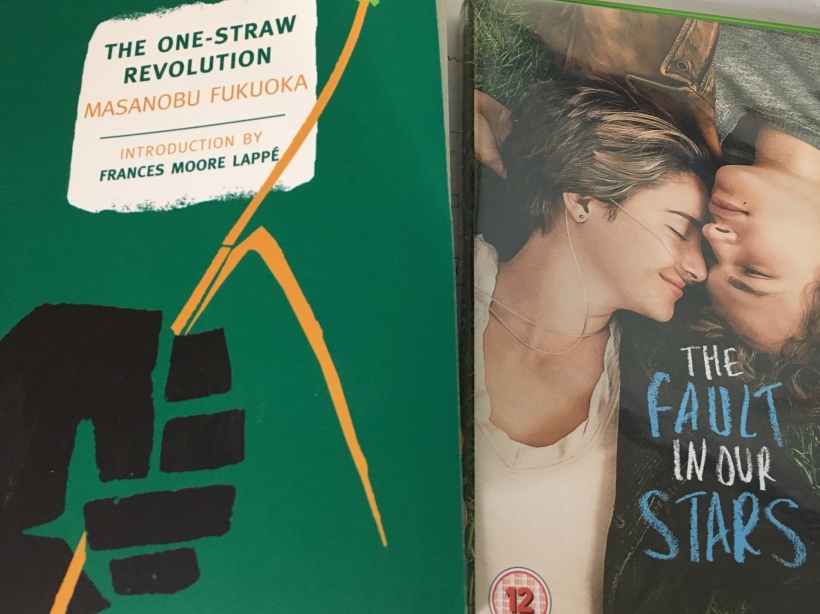 So this morning, I tried some ‘no or little work’ gardening following the advice of Fukuoka and my son joined in.  He then went to a see a friend for lunch and as he left, I joked, ‘I hope you don’t talk about exams!’ He laughed and waved goodbye.  In his writing, the Buddhist monk Nichiren advises his follower, a typically hot headed alpha male samurai warrior, Shijo Kingo, ‘Though worldly troubles may arise, never let them disturb you. No one can avoid problems, not even sages or worthies.  Drink sake only at home with your wife….Suffer what there is to suffer, enjoy what there is to enjoy. Regard both suffering and joy as facts of life.’ I had smile as I realise that often I enjoy what is there to suffer and suffer what is there to enjoy! But it is actual so much simpler just to enjoy life.