I have been writing quite a bit in my new book about the value we ascribe to creative pursuits and what people are willing to pay for our creativity.  As creatives, we are bound by the money that customers will pay for our work.  Some things sell and some don’t.  As we saw the 888,246 ceramic poppies at the Tower of London in commemoration of the British lives lost in the First World War were all sold- they were reasonably priced and the work had sentimental value for each person who bought it.  The value of mass produced items can be enhanced through an association with an emotion.  Without that emotion, everything has Ikea value!

Oscar Wilde differentiated between the cynic and the sentimentalist, “What is a cynic? A man who knows the price of everything and the value of nothing. And a sentimentalist, my dear Darlington, is a man who sees an absurd value in everything, and doesn’t know the market place of any single thing.” 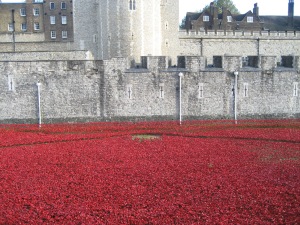 This weekend, I was at my son’s school, running the book stall.  I decided to test the market by asking the customers what they would like to pay for the books instead of ascribing prices to it.  And I was most touched and gratified that people were incredibly generous about it, giving much more than I expected.  Yes, some people even took books for free but most paid well.  In the end, the book stall made nearly £100 for the school. So next time, appeal to the heart as well as the head when asking for money!